Lee Harper went from being a non-league goalkeeper at Sittingbourne to David Seaman’s understudy at Arsenal in 1994 – and, remarkably, he even played in the Premier League.

To play once but never again in the top flight might sound like something of a failure, or at least a missed opportunity, but in our One-Game Wonders series we’ve spoken to many players who see it as anything but.

Most of us grew up dreaming of running out on to the field in front of a packed house for a Premier League game, and these One-Game Wonders actually achieved that dream. Rather than focus on what they didn’t do, we should feel nothing but envy. It’s Roy of the Rovers stuff.

That is particularly true of Lee Harper. Signed by Arsenal from Sittingbourne for £150,000 as a 22-year-old in the summer of 1994, the Londoner had always dreamed of becoming a professional, but the realities of the sudden change in his life came as a surprise.

“I found myself in a Roy of the Rovers-type story, which was just being in the right place at the right time,” Harper says. “I started in non-league at Eltham Town, where I asked then to sign for Sittingbourne after playing against them.

“The next thing, Arsenal were watching our centre-half, Neil Emblem, as Sittingbourne were producing a lot of footballers at the time – four left for league clubs that year.

“I remember the day Arsenal came to watch me at Moor Green. Then they watched me again at home and invited me down for a trial – two games against Charlton and Crystal Palace.

“They saw enough to give me that contract, so it was an honour and a dream. I always believed I could do it and it paid off in the end.”

Making the step up

His former Sittingbourne manager John Ryan was soon talking Harper up to the press, but the young goalkeeper quickly realised how much he had to learn.

However, working alongside Seaman under the legendary Bob Wilson, Harper adapted to life at the top and eventually got his chance in the Premier League against Southampton.

“The first year was quite difficult as I remember John Ryan putting a story in one of the local papers saying ‘you’ve got a helluva ‘keeper here’ and ‘he can rival Dave Seaman’,” Harper says.

“I didn’t quite realise that as I had this desire and passion and natural will, but I hadn’t had any goalkeeping coach until about six months before I signed for Arsenal. I was nowhere near technically compared to the likes of David Seaman, who was the England goalkeeper.

“That first season was really just training with him every day, watching and learning, it helped my technique no end. I was on the bench quite a lot in the first two years, and by the third year I really felt I was up there, but not having the experience is a massive thing for goalkeepers.”

However, on March 15, 1997, with Seaman and John Lukic both ruled out through injury, Harper was put between the sticks by Arsene Wenger for the game at The Dell.

Harper played behind a back four including Tony Adams, Martin Keown and Nigel Winterburn – not to mention Patrick Vieira and Dennis Bergkamp further up the pitch – as Arsenal won 2-0 thanks to goals from Stephen Hughes and Paul Shaw.

“I knew I was going to play as David Seaman was injured,” Harper says. “John Lukic had been brought in and when I spoke to Arsene about it he said he brought him in because of the European games to add more experience.

“Lukic had started the week before at Everton which we won, but he injured his toe so I knew he was touch and go. I think I found out on the Friday that I was going to be playing which allowed me to prepare my mind for the Saturday.

“I remember the point blank save I had to make from Matt Le Tissier from six yards, it really couldn’t have gone any better, it was a fantastic game to play.”

Turning down a new contract

Despite his clean sheet in the victory, Harper would not play again for Arsenal. Wenger offered him a new two-year contract and the promise of being No.2 ahead of Alex Manninger, but Harper decided it was time to branch out, so he joined former Gunners boss Bruce Rioch across London at QPR.

“I sat down with Arsene and he gave me another two-year deal,” Harper says. “As much as I love the football, I am a fan of the club, I was never going to find myself playing many games due to Dave Seaman and the club had also taken on Alex Manninger.

“Arsene said I would start ahead of him, but I didn’t believe 100 per cent that was going to happen, I felt it would be best if I moved on.

“But what a great institution Arsenal is. You realise once you leave how little can compare to it.”

Rioch, however, installed Harper as first choice at QPR, where he would spend four years which were full of ups and downs as the club struggled.

“You realise the be-all and end-all is first-team football,” Harper says. “If you’re a ‘keeper at Arsenal and you’re a first-team footballer you’re always going to stand a good chance of a move because Arsenal don’t produce bad goalkeepers. I had the opportunity to work with and learn from the best in Bob Wilson.

“Bruce Rioch and Stewart Houston who had gone to QPR knew what I could do, they made an offer, and I felt it was another London club and a good one.

“They spoke about me playing, which is what I needed. I went there and, despite a couple of bad injuries, I played 140 times in the league in my time there in my four years and I really enjoyed it.

“It was a great family club and it is a place I will never forget, but the team didn’t really have a lot of success at the time, there was a lot of turmoil with administration.

“People say once you leave Arsenal nothing compares, and I can understand that, but I don’t regret my decision.”

Spells at Northampton and Kettering would follow, including some memorable moments for the goalkeeper, who would win the PFA Divisional Player of the Year in 2003-04 when playing for the Cobblers, not to mention some great FA Cup ties.

Asked what his best memories in the game were, however, Harper says: “My Arsenal debut is up there.

“Also, being part of the squad, travelling for the Cup Winners’ Cup final which we lost to Real Zaragoza with the Nayim goal from the halfway line effort, which I prefer to forget.

“With Northampton, the Man United game in the FA Cup where I saved the penalty from Diego Forlan and still to this day get people talking about that game, although we lost 3-0. 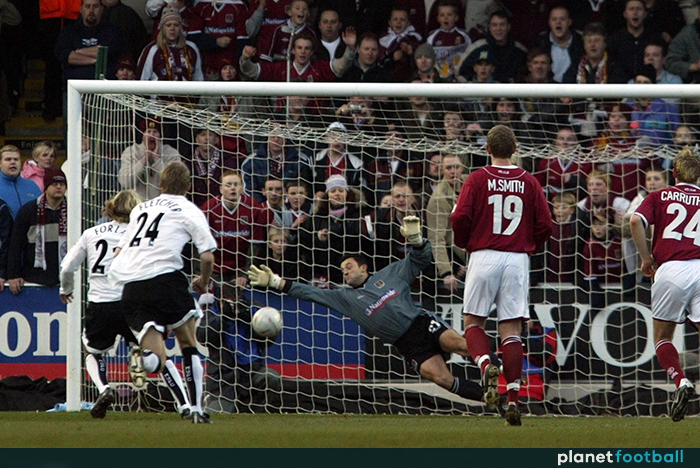 “With Kettering Town we beat league opposition four times. We beat Notts County, Lincoln City, Hartlepool, we took Fulham to a whisker of a draw, we held Leeds when I was manager 1-1 and took them to a replay but lost in extra-time.

“There were so many great memories down the years and I could look back at my career fondly.”

Now Harper runs his own successful goalkeeping academy, a scaffolding business, and is looking to market his own goalkeeping gloves, which is keeping him busier than any forward line ever did.

“I have managed to have 18 of my own goalkeepers move into football clubs,” he says. “The likes of Tottenham, Brentford and Millwall have all snapped my goalkeepers up.

“It would be nice to average two or three a season going from my academies into professional clubs and hopefully see a few of them progress into first-team goalkeepers some day.”

And if one of them manages to play in the Premier League, even if just only once, it’ll go down as one hell of an achievement, just like Harper’s.

This article was originally published in January 2018.

READ NEXT: Alexander Hleb: I cried over Arsenal exit; most players regret leaving

Tottenham joined in race by Villa, Fulham after ‘enquiring’ about out-of-favour Barcelona star

Virgil van Dijk on Argentina clash: Netherlands are preparing for a lot more than Lionel Messi

Adrien Rabiot: France are ‘lucky’ to have Kylian Mbappe but ‘there is no dependency’